She wanted a career in law enforcement. He wanted to be an engineer.

They both joined the military because of the promise of future educational benefits. But when they got out of the service, their GI Bill benefits made them ideal targets for unscrupulous and duplicitous for-profit colleges.

Since the passage of the GI Bill more than 75 years ago, predatory schools have reeled thousands of veterans into programs of dubious quality that don’t lead to good jobs. Many of these institutions are for-profits that charge tuition rates that exceed GI Bill benefit caps, resulting in veterans entering the job sector with a worthless degree and serious student debt.

Berkhalter grew up in a neighborhood in Lima, Ohio, nicknamed “the Snake Pit.” She knew early on she wanted a career in law enforcement.

“It wasn’t the best part of town,” she recently recalled. “I saw bad things, and I wanted to help people.” Berkhalter dreamed about becoming a lawyer or a criminal behavior analyst in the Federal Bureau of Investigation but knew it would be next to impossible for her single mother to afford to send her to college.

Enticed by the generous educational benefits offered in the GI Bill, Berkhalter enlisted in the U.S. Army as a high school junior. In 2000, she began her military career as a motor transportation specialist, remaining hopeful of securing a second career in law or justice.

Berkhalter was lured in by deceptive marketing tactics boosting the criminal justice program at ITT Technical Institute, and so, in 2006 she enrolled at the school. Berkhalter, now 39, was excited by the school’s promise of providing a top-notch education that would be partially covered by the GI Bill. Yet she found her classes were often taught with outdated textbooks and by unqualified professors, complaints common among former students.

When Berkhalter graduated in 2010 with a bachelor of science, she found herself with nearly $100,000 in student debt and a degree that meant little to potential employers or other schools. When employers did background checks, they found that the institution she had graduated from — despite accepting hundreds of millions of federal dollars every year — had gotten into trouble with the Department of Education, and the credits Berkhalter had earned toward her degree were useless.

“I had an extreme amount of debt, and I didn’t know my options…That school completely smashed my dreams,” she said.

An Advocate for Veterans

As she struggled to find a job in criminal justice, Berkhalter began researching whether she could get her student loans forgiven or claw back some of her wasted GI Bill benefits. After ITT shuttered in 2016 following federal sanctions and amidst increasing oversight, she found help through two Arnold Ventures grantees, Harvard Law School’s Project on Predatory Student Lending, and Veterans Education Success (VES), a Washington D.C.-based policy and advocacy shop focused exclusively on issues surrounding the GI Bill.

Army veteran Tasha Berkhalter talks about the impact of being targeted by predatory, for-profit colleges for her GI Bill dollars. 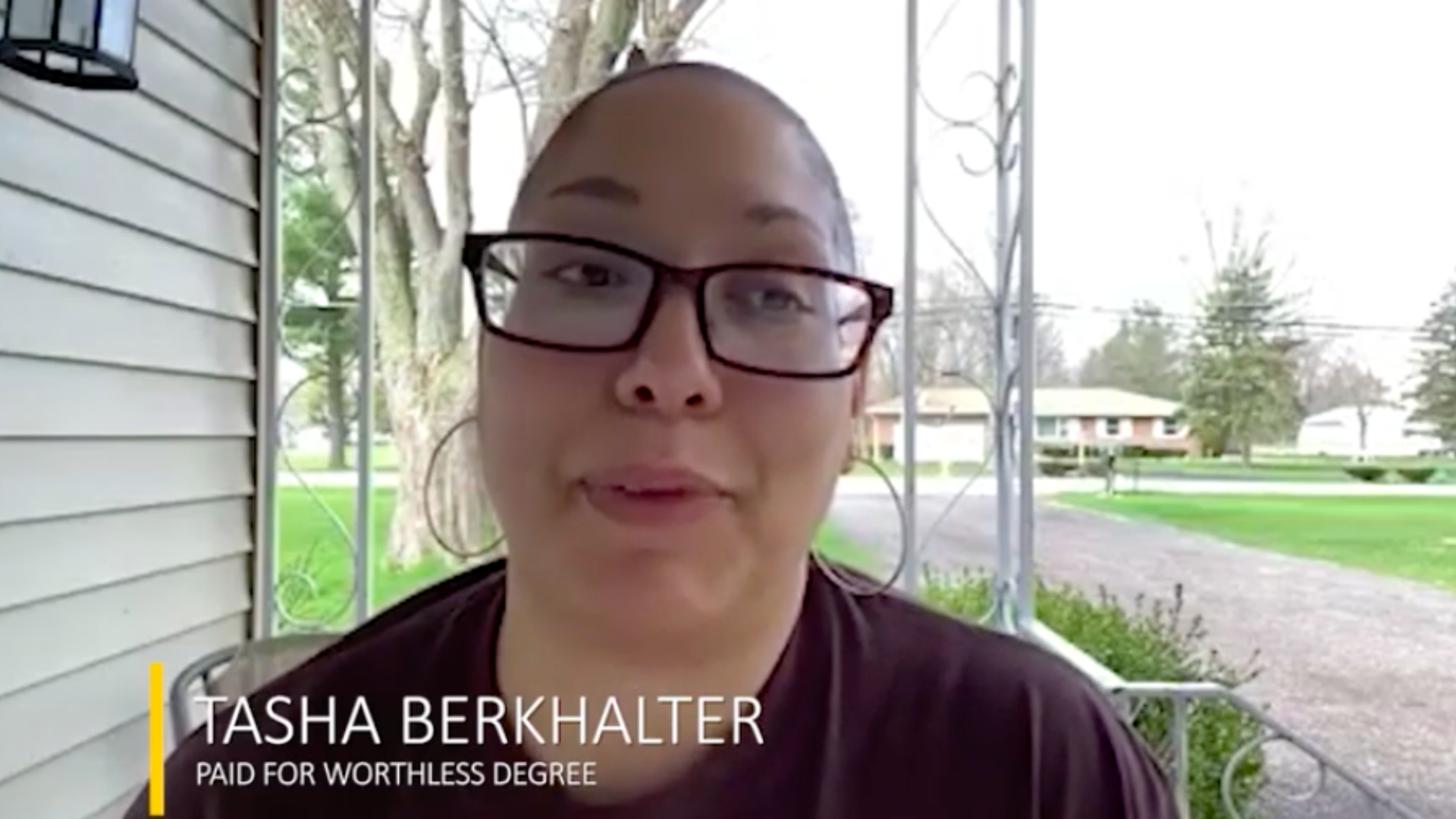 VES staff have helped Berkhalter navigate the dizzying federal bureaucracy and helped her apply for loan forgiveness under a clause of the Higher Education Act known as borrower defense, which is intended to relieve defrauded students of their student debt. They are also exploring whether Berkhalter is entitled to further school assistance through the VA’s vocational rehab program. “The folks at VES are amazing,” she said. “They deserve all kinds of medals.”

If Berkhalter’s application is accepted, her family’s economic conditions would quickly improve. While Berkhalter bounced around between minimum wage jobs after graduating ITT, she’s been at home for the past two years taking care of her youngest daughter, who was born with hip dysplasia. Her husband works but doesn’t make enough to pay all the bills, and the family receives government assistance. Her student loan payments are in deferment.

“I’m not sure I’ll be able to secure a loan to help send my oldest to college,” Berkhalter worries. “To get my debt forgiven would really open huge doors for us. We’d probably be able to buy a home.”

Fellow Army veteran Thoma, 37, is also seeking forgiveness for his student loan debt. He accrued more than $60,000 in debt during his time at DeVry University, which has been castigated by the VA for making deceptive claims about the quality of its programs.

Thoma was initially excited by DeVry’s engineering program but found the school’s flashy pitch diverged significantly from the true picture on campus. He said some of his adjunct professors weren’t well-versed in the material, and the school’s labs were stocked with broken and uncalibrated equipment.

After he graduated in 2015, Thoma struggled to secure an engineering job. “I can’t tell you how many resumes I sent out, how many interviews I had,” he said. “It became clear that DeVry was looked at as a diploma mill. If you paid your tuition and showed up, you were guaranteed to graduate.” Thoma now works as a project manager for Charter Communications.

How is it possible that veterans, who have served our country honorably, have become such targets of deceptive behavior? Unfortunately, our government has allowed it to happen. Over the years, the federal government has repeatedly failed at providing meaningful oversight into institutions taking GI Bill money, particularly for-profits. For-profit colleges are required to get no more than 90 percent of their revenue from federal dollars. But with their aggressive lobbying efforts, they have managed to exclude GI Bill money from that 90 percent (known as the “90/10 loophole”). This loophole makes for-profits highly incentivized to aggressively recruit veteran students as a way to increase their bottom line.

To be fair, the government has tried to do a bit more in recent years. They created a school comparison tool for prospective veteran students and investigated some schools accused of engaging in predatory practices. In March, the VA took the extraordinary step of suspending veteran student enrollment at five schools deemed to have engaged in deceptive advertising or enrollment practices. Yet the 90/10 loophole remains open.

In addition to continued support of VES, Arnold Ventures has supported the American Legion, the powerful veterans’ service organization that was critical in drafting and passing the first iteration of the GI Bill. The organization remains intensely focused on protecting the benefits enshrined in that first law and has since deployed policy and lobbying staff repeatedly to protect enshrined benefits and crack down on bad actors.

A top legislative priority inside the Legion, VES, and Arnold Ventures is the repeal of the 90/10 loophole. While efforts to count GI Bill dollars as student aid have languished in Congress for years, there are promising signs of growing bipartisan consensus for the change. There is a slate of other meaty GI Bill reforms circulating on Capitol Hill that, among other things, would strengthen state oversight and evaluation authority for schools receiving GI Bill dollars and establish better school evaluation tools for prospective student veterans.

Kelly McManus, Director of Higher Education at Arnold Ventures, believes the political winds are shifting as more people learn about the plight of veteran students. Both Berkhalter and Thoma have shared their stories with lawmakers as part of broader efforts to build support for proposed veteran student protections. “More veterans are coming forward and telling their personal stories,” McManus said. “That has made all of the difference.”

Asked to imagine how Arnold Ventures would define all-out success in the student veteran policy portfolio, McManus said she hoped for a day where veterans’ advocates would no longer need to dedicate significant resources to making cheated veteran students whole.

“For VES and the Legion to be able to highlight educational opportunities as opposed to making sure veterans are protected would be fantastic,” she said. “We want GI Bill dollars to promote economic mobility the way they were intended to.”

The GI Bill has been in place for 75 years, and while it has helped countless veterans buy a home or start a business, its track record in higher education has come under scrutiny. In the latest episode of “Deep Dive with Laura Arnold,” Laura Arnold talks to Carrie Wofford, Founder and President of Veterans Education Success, about how for-profit education targets veterans' GI Bill money.